The Scottish Enduro Series (SES) is the first time I’ve raced at a national event. It consists of six rounds, averaging 30km route with 5-6 timed stages. Practice happens on Saturday with the race occurring on the Sunday.
I have given a bit of detail on each round below. Overall I have found this to be exceptionally challenging. The SES has some brutal climbs and has certainly pushed my fitness levels, and the organisers fondness of mud and roots doesn’t exactly play to my strengths. However challenging it has been it has also been fun, I’ve seen a lot of new trails I would have never normally found, met a lot of great people and developed my riding far quicker than just bombing around on my own.

The final round of the Scottish Enduro Series was held at Ae Forest. It was a 35km ride with five timed stages. The practice day went smoothly, and I think I am finally getting used walking line choices and remembering them come the following day. Stage 1 started after a very long fire road climb to the top of the marked downhill trails. I excitedly launched in to the downhill track only to find it immediately turned the opposite way and on to some natural, narrow single track. After some twisty tight turns came a very slippy drop on to the fire road which breaks this stage up. The drop in to the lower section is where I took a fantastic tumble during practice (right next to a photographer). I manage to clear this in in the race, but only by sticking my feet out on the corners and sliding my way round. Stage 1 finished on the last 5 meters of the Omega Man trail, and we were back on for the next climb. Luckily the climbs here, although very long, were not especially steep and meant that I spent the entire day talking to whichever poor soul ended up cycling at my pace. 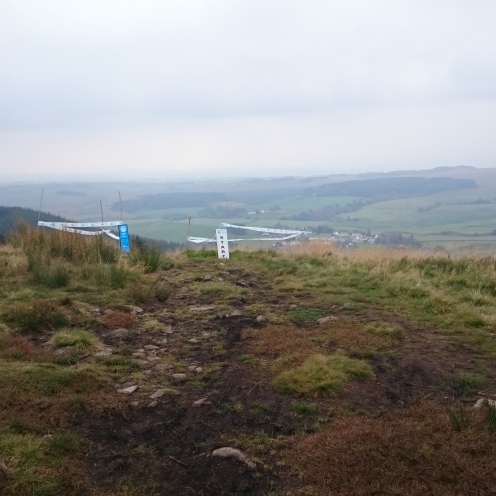 Stage 2 started in a clearing in the woods I never even knew existed at Ae. This was always going to be a bit hit an miss as it is a peddly stage, and my dropper post was only working 50% of the time. We dived straight in to thick forestry, and with low light meant that I could see very little of where I was going, which was probably a good thing as it was nothing but mud and roots.The stage dropped on to another fire road, with an uphill sprint, straight on to what is normally the cross country climb (thankfully my dropper decided to work). I do not remember there being so many descents in the climb, because when we came to do it in reverse there were a hell of a lot of climbs involved. Getting to stage 3 involved a long climb full of switchbacks, and it was at this point the clouds decided to dump all the rain they have. This made the third stage very interesting. It included the top section of the Omega Man trail, very fast, don’t touch the breaks and pump in to all the corners – also wear goggles as the rain would have blinded some riders. After a while it turned back in to natural open switch backs, about half way down this i slid out, nothing serious but when I jumped back on my bike I found that the handlebars were no longer straight, and I didn’t have time to jump off and fix them, which resulted in me trying to steer my wonky bike down the last third of the stage.

Stage 4 and 5 started back at the top of the downhill trails next to stage 1. Stage 4 was such a mixture of different terrains it was probably my favorite all day. Starting on the Shredder, some rocky hucks and then an off camber trail in to some sloppy muddy trails through the trees, this turned in to much drier tight turns as the forest opened up, and then on to the lower section of Omega Man with lots of table top fun. Stage 5 followed the main downhill route, using some sections of it and then randomly sending you of on to some natural and back on trail, until the bottom section which by this time of the day had turned in to such a mudslide I was contemplating sliding down on my arse. Including one section where I was overtaken by another rider as he flew through the air without his bike.

All in all this was one of my favorite events of the series using a good mixture of the built downhill and cross country trails and the natural sections and although 9th place was not what I was aiming for it was enough to pull me up the overall rankings to finish 8th for the series.

Laggan was a mixed bag for me. Normally a trail centre which I love riding, and I was looking forward to it. Some early starts as I decided not to camp and travel the 2.5 hours to get there in the morning. So after some coffee and bad car singing I was really looking forward to seeing the trails. However with four of the six stage on the opposite side of the valley to the trail center I was apprehensive. Stages 1-4 have some what merged to together in my mind. They were all natural trails, mostly in the forest, some steep and slippy sections and some peddly boggy sections. It started to pick up with some more fun bits of trail on stage 5 which used most of the black trail. Having only ridden the black once before there was a lot of time just speeding over rocks and hoping. Just as I would build up some speed the trail would dive off in to some muddy natural section. Stage 6 was a saving grace of fast berms and jumps on the orange line. Needless to say I struggled with this round and came away with 15th place.

Round three and up to the Glenlivit trails this time. The round might not have had the highest climbs, but it certainly had one of the longest distances with 42km in the saddle. Even the stages were peddely, with all six of them requiring a leg burning pace to get down them. I honestly thought I was going to hate this round, however much to my surprise this was really fun. Stage one was steep a loomy, with steep switch backs which had me over the handle bars right in front of the photographer. Stage two was in the trail center, and was s print from the word go. This is the first time I’ve ever said this, but thank god for spin classes. My legs and brain were so used to sitting at a fast pace, that I actually found the stage one of my best. Stage three was probably one of the longest stage I have yet to encounter. Starting at the top of a moor the trail then crossed a long field before a sharp lung wrenching climb, and in to three stretches of tight forestry trails. The end of this stage was definitely the best place for the food station. Stage four required us to climb back up to the top, on par with the start of stage 3. Stage 4 was a very unexpected change of pace, dropping us back on to trail centre tracks, which could be taken very fast, and lots of fun jumps, and the by now familiar and random off shoots on to natural steep switch backs which drop you back on to trail centre tracks. Stage 5 was very similar to stage 4, and resulted in lots of smiles at the bottom. Stage 6 was a quick natural trail over lots of bouncy moss. Lots of fun but very difficult to keep any speed on.
There seemed to be a lot more riders at this event, maybe bringing in more riders from further north. These trails were a lot of fun (maybe with the exception of stage 3), and I’m happy to have made 12th place. 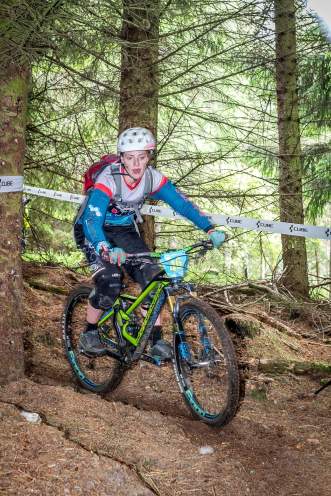 Fort William has got to be one of my favourite places to ride. So w I was very exited when I booked in to this one. The mixture of terrain types and the fantastic design of the trails means every one is different and everyone is fun. I was staying in some small cabins out by Kinlochleven, only 30minuets away, and get treated to some beautiful views in the morning. Practice was good, the weather was chilli with a little light drizzle but other wise good. The first stage was a peddally zip through the trees. Stage two made use of the bottom section of the world cup downhill trail, before traversing across on to the blue cross country. This was definitely my favourite stage, although remembering you are in a race and not getting carried away on the jumps was difficult. Stage three was the well established red cross country descent. Stage four was a long slog along the fire road to a boggy natural trail with deep peddle catching berms, and it was a simple case of hanging on until the bottom. Stage five started near the top of the red downhill trail. This called for hike’a’bike time. Carrying the bike on your back for a few kilometres up the side of the hill really takes it out of the legs, and here is where I really appreciate having a carbon frame. However the wind chill meant I was keen to get back riding. The practice went as smooth as can be expected, skipping over big boulders and rock gardens has always been my playground.
When it came to race day however things were not so straight forward, it was much colder and damper and the wind was picking up as the day went on. The first three stages went cleanly, with no issues, however the effects of a long practice the day before were starting to have their toll. Stage four had got much more slippery than the day before, which resulted in an over the handlebars moment of the course on a steep berm, so vital time was lost untangling my self and getting back on my bike. Stage five by now was an entirely different beast. I slogged my bike up the hill to find that the wind was enough to blow you of your feet. Once on the stage it became impossible to stay on the trail, and when it turned in to the head wind it was like trying to cycle in to a brick wall. This resulted in a lot of riders doing the same as me, picking the bike up and running the course until it dropped out of the wind.
Despite these problems I finished 6th in my category. Which just makes me even more certain about my love of rocks and maintained trails over roots and mud. 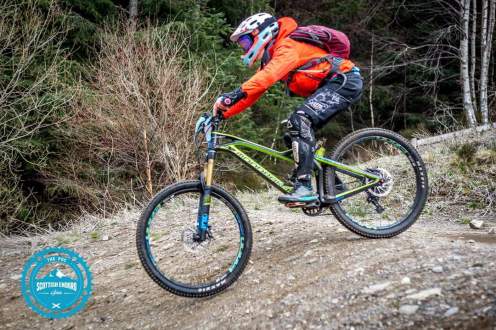 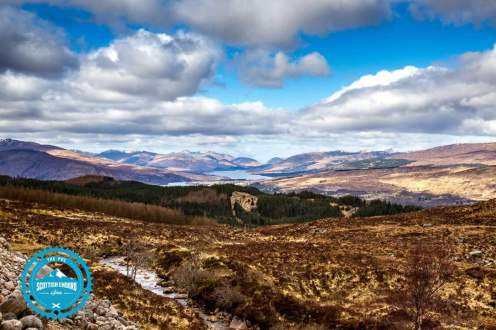 The first of the 2016 races, and my first SES. I can safely say this was a baptism of fire. The first four stages took place in the commercial forestry, and after weeks of heavy rain had turned much of the trails in to mud slides. I have never been tipped of my bike and forced to walk so many stages of a trail before. I wasn’t the only one. With many of the competitors taking bad crashes or just not enjoying it, and deciding to pull out of the event after the practice day. Perseverance paid of, as stages 5 and 6 were held on an open well draining hill on the opposite side of Dunkeld. These were steep but open, with sharp berms, and I found the flow much easier and started to enjoy myself. Whether it was my perseverance or my flow, or the fact that a lot of riders didn’t return for race day meant I got a very respectable 9th place for my first ever SES.