I am not entirely sure how I got talked in to this one. Apparently if someone asks if I want to race bikes I can’t say no… apparently this now includes peddling up hills! 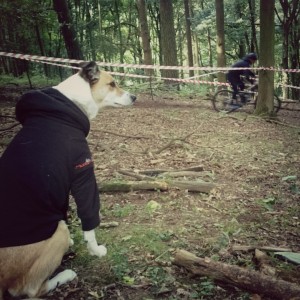 Muckmedden held their annual mountain bike festival just outside Newburgh, in Fife over Friday 23rd until Sunday 25th June 2017. Over the weekend there were loads of different races going on to make sure there was something for everyone. The main event, the Eliminator, was held on Saturday. The Eliminator is a complex downhill race, where riders race head to head in a knockout tournament to find out who is the fastest.  But first up was the Friday night Cross Country Four Cross (XC4X) race.

As the Eliminator sold out before I had gotten around to thinking about entering, and after racing the four cross at Fort William a few weeks ago, it was suggested that I race the Cross Country Four Cross race. Now I hate the concept of being timed during any climbs, peddling up hill is not something I am any good at, but as the course was only 0.8km long, 40m climbing, lasting about 3minuets I thought I would give it a shot. The Muckmedden events are always a good laugh and great atmosphere; I knew that although this was technically a cross country (XC) race I would still enjoy myself.

Only two women had entered this race, so we were piled in with the men for the race. As we gathered around the start line it was clear that some people were taking this a lot more seriously than others. There were strong lycra clad guys on their light weight xc bikes. Those of us from the enduro scene, on locked out full sus bikes and baggy mtb kit, a couple who were probably there for the eliminator with full face helmets, on downhill bikes, and the guys from Ride Retro on a couple of beautifully restored 80’s bikes. I have never seen such a random mixture of people lining up on the start line.

Our names were randomly pulled out the hat to determine who we were racing against. So I got called up against one XC guy and a couple of enduro regulars. Similar to 4X the starting time could be anything within a 5 second gap to ensure everyone sets off together. A short sprint across the field including a compulsory steep log roller before a sharp climb up in to the woods. Despite getting off the starting line 2nd and holding it to the logs, the moment I hit the climb I slipped in to last place. At the top of the climb the track weaved over the off camber roots and through some tight twisty trees, this is where I was most comfortable and I kept up with the guys’ pretty well. At the end of the trees there was a sharp right turn. This caused some hilarity as I was on the high line, and another rider was on the bottom line so as I turned down the hill it resulted in me t-boneing in to him. We sorted ourselves out quickly to sprint back across the field and on to the long access road slog up the hill. Unfortunately here is where my legs start to fail me, and I just don’t have the same peddling power as the men. Still I managed to not let the gap widen too much. The track took a sharp right up a very steep climb, where it became debatable to jump off and run. The top of this horrid climb took another sharp right and put us back on to single track through the trees. Here I could let the breaks off and use the speed to bunny hop the rough rooty sections before the final right turn back towards the finish line. Although I finished last and was knocked out of the tournament I am happy that I finished not too far behind the men I was racing against. 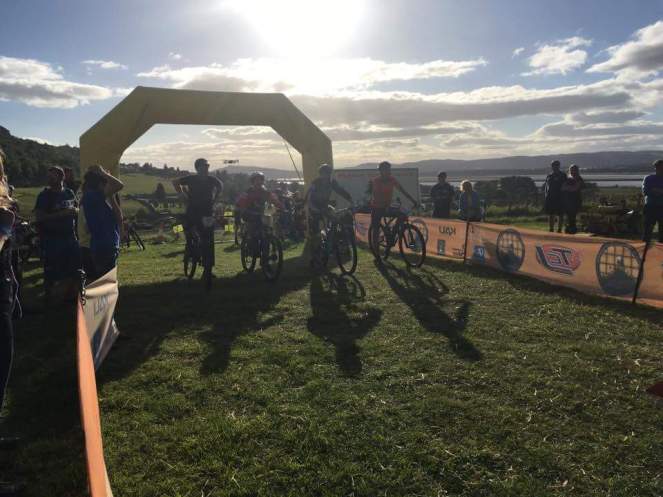 At this point I thought my race had finished, and I was ready to go and get a celebration pizza and evening cider. However about 20min later I’m being called back to the start line for a head to head against Evka, the other female rider, to determine the fastest women. As there are still so few women who race mountain bikes in Scotland it is normal to know everyone your racing against, and the race went almost exactly as I could have predicted. On the shout of GO I got away quickly and was the first to the woods, over the technical terrain I gained a good lead, however when it got to the climb Evka, who is a much stronger long distance peddler, started closing the gap. By the top of the hill Evka was only a foot behind me, back on to the technical descent, which is my strength, and I managed to pull away again. I was first over the finish line, but only just, and at the cost of my lungs, which were feeling the full burning effect of racing uphill.

The XC4X was a fantastic novel race set up, which was really good fun. Even better in the festival set up, as the rest of the evening could be enjoyed with cider in hand watching the bunny hop and adult balance bike 4X competitions, and shh don’t forget the silent disco. Thanks to Evka for an awesome finish and really pushing my XC ability, any more climbs and I’m sure she would have had me in her sights!