So, 2017 has turned into my year to find some of the most ridiculous mountain bike races in Scotland. Who am I kidding, the moment the tickets for the endurance Down Hill went on sale I was booking my place and I have been looking forward to this one since they announced its return at the beginning of the year.

The Endurance Downhill is like any other endurance bike race. Only this one started taking steroids and bullying all the other bike races. The challenge is straight forward, complete as many laps of the World Cup Down Hill track and the Nevis range in Fort William within six hours. This race is designed to challenge not only skill and speed, but also the riders’ ability to balance their fitness and tactics against their ability to keep their bike functioning and mechanical free throughout one off the most gruelling tracks in the UK, sounds simple enough!

So the day had a pretty relaxed start (compared to most race days), registration opened at 8:30, but we didn’t rock up until about 11. There was an open practice session from 10 until 13:30, so after signing in, we set up the bikes and got one practice run in just to warm up. This is not the type of track you want to be jumping in to cold, especially as the last time I rode it successfully was well over a year ago. The decision was taken to only do one practice run and conserve our energy for the main event. Tools and essential bits of equipment were left in a pits area next to the finish line where the rules were clear, riders weren’t allowed to change the frame, wheels, or suspension of the bike, but other repairs were predicted a necessity on this track. So we set up our small area of tools in the pits and went to eat and chill waiting for the start.

There were 87 riders racing on the day, and because of the mass start nature, we needed some way of thinning the riders out before they reached the gondola. This was achieved in the most brutal start to a race I have ever experienced. Racers lined up at the bottom of the track, and when the countdown was reached, all 87 racers sprinted to collect their bikes, with a Le Mans style run to the bikes! Which we had placed further up the fire road. It was then we proceeded to peddle the 2.4km and 100m climb to the Silverline wall ride. This is where the riders on their single crown enduro bikes had the advantage. Those of us on the big triple clamp downhill bikes had more of a challenge. We had barely even started and it took all my will power to keep peddling, and ignore the blood pounding in my head, trying to breathe in a full face helmet and not throw up by the time I reached the top. Without any hesitation (by reminding myself I would get plenty of rest on the gondola) I dropped in to the trail and was back in my comfort zone, overtaking two people on this section before reaching the gondola. The gondola ride took between 10 and 15 minutes depending on the wind speed.

Most people have seen videos and photos of this world famous track, but for those of you who don’t know the 2.8km track can broadly be split in to three sections. The pinball section at the top which has fast switchbacks, boardwalks, and some of the steepest roughest rock gardens you will ever experience. Hoping through the deer fence shoots riders in to a brand-new section with big sweeping corners and brings us in to the forest section, which is rough but very fast and requires a light touch to skip over the rocks and roots. Keeping light on the bike is exceptionally easy here, as by this point my muscles are too tired to fight it anyway. After the forest section, the track becomes the well-known motorway, which is characterised by huge table tops, gaps, step ups, all of which I manualed and rolled to conserve energy and not risk damage to the bike or myself. The track descends 555m and the world pros can do this in under 5minuets. My fastest ever time is about 7min40sec, however I was averaging between 8 and 9 minutes as the race went on.

Three hours in, and half way through the race, I had completed 6 laps of the course, having managed to avoid crashes and pass a fair few people, the track was starting to take its toll on my body. The gondola provided much needed rest where I could stretch out my legs, uncurl my hands and try and get some food and water back into me. By sticking to a routine of having something to eat on every run I was able to keep going without needing any longer breaks. But here is the unfortunate part, I only managed to squeeze a couple of laps in before the weather took a change for the worse, and the increasing wind speed picked up to the point that the gondola was no longer able to operate. So, by 8pm the race had finished and I had achieved a bone shaking 8 laps in 4.5 hours. Although I would have liked to have seen just how far I could have gone in 6 hours, I’m not annoyed that it finished early, I could already feel the fatigue it was taking on my body.

In a change of format from most mountain bike races, there were only three categories, hard tail, single crown (enduro bikes), and triple clamp (downhill bikes). It’s says a lot about the perceived difficulty level that absolutely no-one entered on a hard tail. So, the final podiums went to male single, and female single crown, male triple and female triple crown. I am so happy that I managed to survive and bag myself a second place podium in the female triple crown category, but also pretty stoked that out of the 87 racers, male and female I managed a 37th place over all. I really hope that No Fuss bring this one back again next year, the challenge of pushing body, bike and mind to the limits like that where you find out what you’re made of. 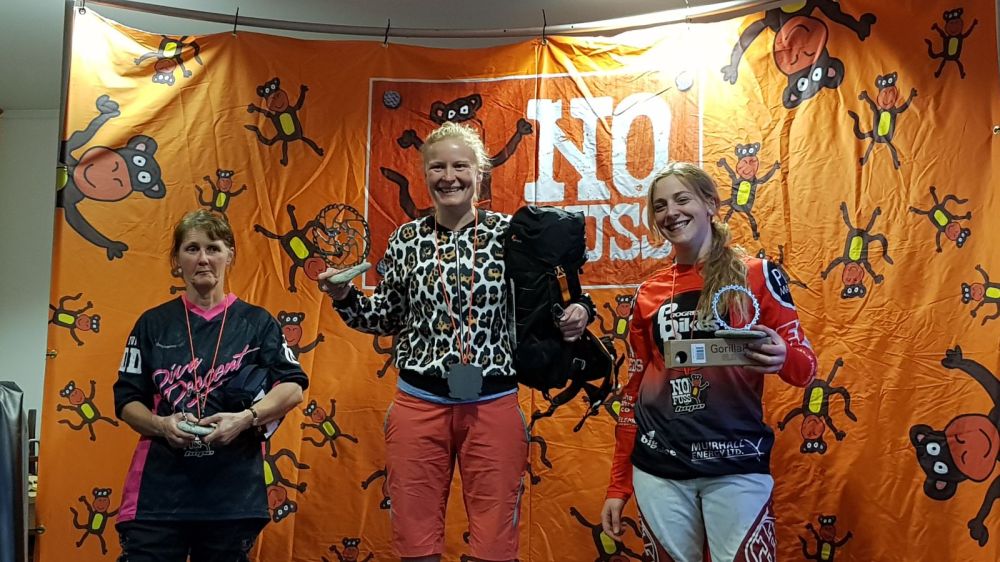