This is my second time racing the 4X Pro Tour World Series, this time I am there legitimately after podiuming at the British 4X a couple of weeks before. After a year of practicing my gate starts, jumping and manualling skills, I was feeling a bit more confident then when I was a complete rookie last year. Despite this I still felt hugely out of place in a line-up of 4X Pro riders, all on their small, hard tail, 4X bikes, when I was rolling up on my big 29inch wheel enduro bike. However, the track was rough, and I might not be the fastest out the gate, but my extra suspension and grippy tires were going to pay off on all the big loose corners.

The 4X Pro Tour is always held the same weekend as the Downhill World Cup, turning the Nevis Range in to the biggest mountain biking event of the year, with people traveling from all over the world to come and watch. I arrived Friday morning to get registered; it’s the best feeling getting to roll past security and collect the riders passes, which allow you access to the entire event all weekend. Because the finish line of the four cross track is shared with the downhill track we had to wait until the Downhill practice had finished for the day before we could get on the course. Luckily, I had the right bike for a bit of a trail ride to kill some time, so I joined the Dudes of Hazzard on a ride out to some of their local trails. I was back in plenty of time to have a track walk, before going for my practice runs at 4.

The track hadn’t changed much since last year, or the British round a couple of weeks back, but the track had been improved. The rough patches and been smoothed out and the lips of the jumps had been built up to make everything roll a bit faster and higher. I know Fort William is famous for its rocky trails, but I swear they have imported more ‘fist-sized’ rocks just to fill the berms up with. We have had a lot of sunny dry weather on the run up to race weekend, and the track was running very lose and dusty. Tire choice was going to be important for all the riders.

The practice runs were going well, I felt like I had plenty of energy and was on form, so I was raring to go when it came to the qualifying runs. Everyone had one shot of getting down the course as fast as possible. Last year I had issues getting out the gate being on flat pedals. This year I was clipped in and feeling confident. I put in a solid 51 second run, although this was 7seconds behind the fastest woman, it was enough to put me in 6th place, as my aim was simply not to come last I was happy with this. 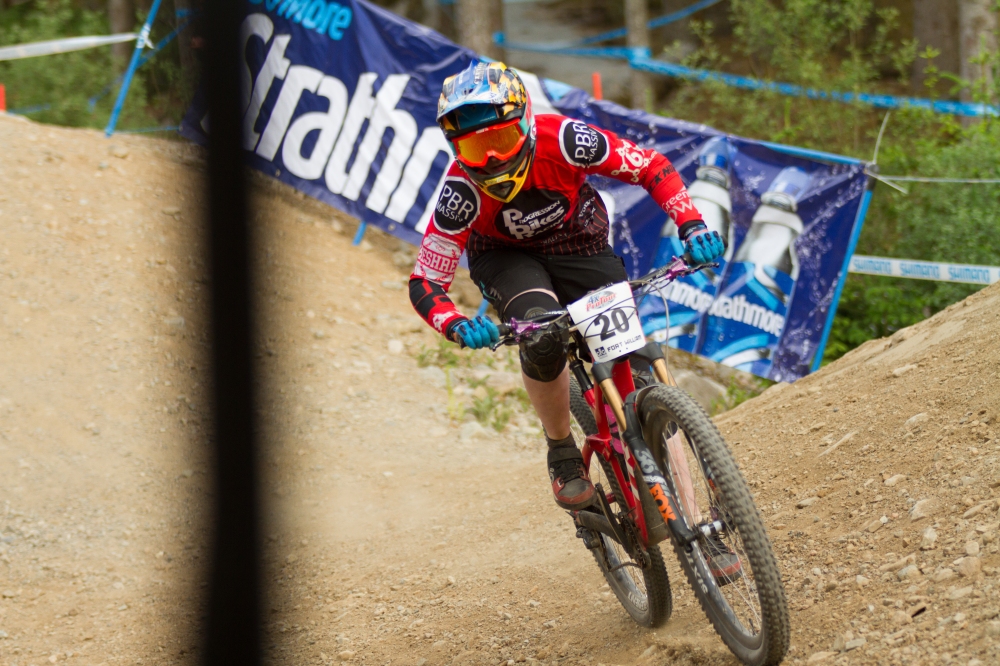 Saturday was race day. Once the Downhill riders had finished their qualifying runs, we could get on track for a couple of practice runs before diving in to the first set of motos. Everyone gets a chance to race, and the two fastest from each moto goes in to the next round. As there were only 8 women we went straight in to semi finals. In a moto against the women who came in 2nd and 3rd I knew it was unlikely that I was going to win, but with stiff competition from number 7 seed, I was still going flat out. This was one of the closest races I have felt in a long time, with our bars being locked over one of the jumps, it certainly gets the adrenaline flowing.

Coming in 3rd in my moto meant I was going in to the B final, which would determine the position of who comes 5th, 6th, 7th and 8th. Being on the big bike meant that I was always slower out the gate on the first straight, but here is where the extra grip and suspension comes in use. I was able to hold my lines on the first corner, then as everyone else goes wide in the second berm to hold grip and speed I was able to plough straight through the rough stuff on the inside line and under cut them all. Even though I lost to much speed to now clear the jumps this wasn’t an issue, as even if I came up short and cased the jumps, my suspension and large gear range meant I could just roll straight out of it without losing much momentum. In the end I came over the line in 6th position. Only one spot off the podium, and although it would have been amazing to podium at a world series, as a rider who doesn’t specialise in 4X I was just happy to have survived. There is always such an amazing buzz at the 4X races, and the best part is I could then relax and enjoy all the Downhill action on the Sunday.