I knew the British Championship would be a challenge, but I wasn’t expecting to come away quite as battered and bruised as I did. TweedLove held the three-day event in the heart of Scottish Mountain Bike country, with 53km of riding, two stages in Innerleithen, 3 stages at Caberston, and one stage at Glentress, they reall made use of some of the best trails Scotland has to offer.

The British Champs is the closest thing we have to what an Enduro World Series event would be like. Held over three days, we were able to practice stages 1-5 on Friday, and all the stages on Saturday, before doing the full race loop on Sunday. Of the 28 women registered for racing in the elite (E1) category (which was the only category eligible for the British Champion Title) I was seeded 19th, so we had to stay in seeded order all day, and in theory as we were seeded it was unlikely for us to catch other riders (however I have no idea how the seedings were calculated as we were catching riders all over mthe place). 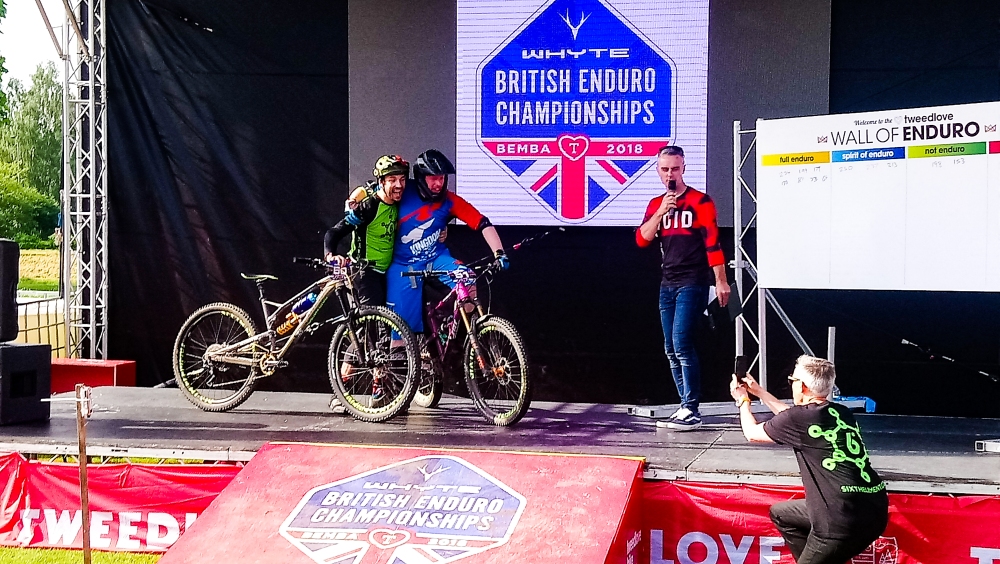 I arrived Thursday evening, so I could get an early start and get as much practice out of the way on the Friday as possible. Keen to get as much done on Friday as possible I practiced stages 1 to 5 in and around Innerleithen, and then Saturday I went and had a couple of runs of stage 6 (because it was just that much fun I couldn’t do it just once). I had intended to go back and do stages 4 and 5 again as I had struggled with them on Friday, but then the rain came, and I never got round to it.  Still I was plenty rested up for the long ride on Sunday. Unlike most of the enduros I race, the British Champs E1 category had timed transition stages. This means there are set times that I must be at the start of each stage, not that the transitions count towards the final result. I notoriously hate climbs, so I knew I was going to be up against it all day long.

The slog from the start line in the centre of Peebles to stage one was certainly a good warm up. Following the river Tweed along the bottom of the valley would have been a lovely Sunday morning ride, if I could look up long enough from the fast pace the women were setting. Straight in to one of the highest climbs of the day to the top of the Innerleithen Downhill tracks.

Stage 1 – Morning Glory – I was so happy to be starting on what I have said many times to be one of my favourite trails. Using bits of Matador and Cresta all the way down the hill. Although the track had taped out all the fun drops, there was still a lot of flow, rock gardens and a couple of really techy corners to keep it interesting, including a couple of straight bits where you could really let fly, and as a bonus it stopped before the last section, which meant the climb back up to the top wasn’t so bad either.

Stage 2 – Fools Gold –  It would have been stupid not to make the most of the newly reconstructed big berms at the bottom of Gold run. Starting on Gold run this track weaved its way tightly through the trees and over a couple of fallen stone walls in to ‘the tunnel’, this is a warp speed straight line through the trees, where I was very glad I was wearing googles because speed tucking over the jumps would have resulted my eyes steaming. The track took a sharp left and in to ‘The Luge’, just what you would expect a long line of big switch backs down the hill in to the bottom section. A few more tight twists through the trees, and just as I’m about to overtake the rider in front I failed to notice my bars clipping the tree, and went flying over the in to what was certainly my most painful crash this year. It’s amazing what your body can do when the adrenaline is rushing through it. Jumped on my feet, bars straightened up, and back on the bike before the rider behind me had caught up. Frustrating that it happened on one of my favourite parts of the course, but you just have to battle through. Stage 3 – Scotland the Per – This stage made the most of the hillside, combining ‘4G’ in to ‘Repeat Offender’ for one of the longest stages, which felt even longer after the long transition. This is such a fun stage, and very different from the previous two. This was very tight and narrow through the trees, and the constant mat of tree roots under your tires made it feel like the roughest pump track in the world. Certainly not helped by my shoulder, elbow, ribs and hip all throbbing with pain at every bump in the track, but easy to forget about it once I’m between the tape.

Stage 4 –  F.E.A.R – Face everything and rise! This was the same re-working of ‘Water World’ that had caused me so many issues in the Scottish Enduro Series a couple of weeks ago. This time I was adamant that I was going to put those fears to rest and conquer it. I was off to a good start, navigated through the long series of super steep chutes, and skinny single track, and as I started along the river bed the water and rocks had a different idea. I was sent head first in to a tree, this time no real damage to me, and after I retrieved my goggles, which had somehow got hung up on the tree I found that I had a flat tire. Well that made the bottom section very tricky, because of the combination of Sixth Element wheels and Huck Norris rim protector, I was still able to roll at a descent speed, but without the ability to properly pop out the corners and off the roots it was still a long run to the finish line. 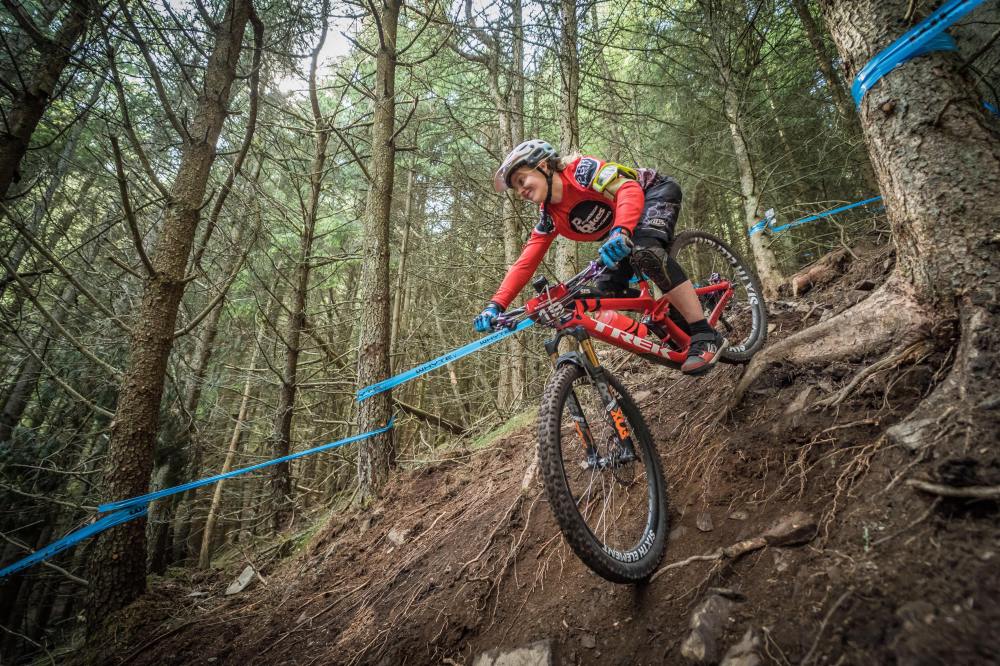 Stage 5 – Born Slippy (Twisty Little F**ker) – I was knackered by this point. After losing time fixing my flat tire I was running late to this stage, so had to jump in to it the moment I got there. Already shattered and out of breath it was not easy to concentrate on the most awkward trail of the day. The first bit of the trail was just a bit too tight to get any flow at speed, a couple of double drops and riders were put on to a long run of very narrow, off-camber, lose trails, with no catch berms on them. This was an absolute commit or die trail, anyone who starts sliding off the trail is going to have trouble getting back on again. Still, I took it easy as I had no idea what tire pressure I was running and survived it cleanly.

Stage 6 – There’s no other – This is how all enduros should finish, on a complete crowd pleaser of a trail. Using the trails that run-down Janet’s Brae and in to the back of Peebles Hydro, this stage was fast, and flowy, with a couple of line options, and in to a brand-new set of berms. Loamy, with high sides, you could really dig the tires in and have so much fun on this last stage. Helped of course by all the cheers from the spectators.

So, despite really pushing the limits of my endurance, and just how quickly I can pedal up the climbs and taking a couple of bad crashes (my arm is currently resting on an ice pack as I type this), and a flat tire, I still really enjoyed this race. I was so happy to have just completed it, especially after I saw how many people had given up during the day. I was even happier to find out I came 6th in the elite category, and the only rider in that category who doesn’t ride for a factory team. Of those that got over the finish line I don’t think many of them got through without some damage along the way, but then it wouldn’t be the British Champions Race if it wasn’t a challenge. It’s all good practice if I ever get around to racing a world series race.