I’m not sure what I expected when entering the NZ Enduro a few months ago. Advertised as a three day, blind enduro epic, sampling some of the best trails the Malbourgh Sound had to offer, and to top it all off the final day was to have a heli-lift to the top of the last few trails. Although the stages were timed, there was more of an emphasis on having an adventure with new and old friends, resulting in a more relaxed feeling than most races I have been to before. 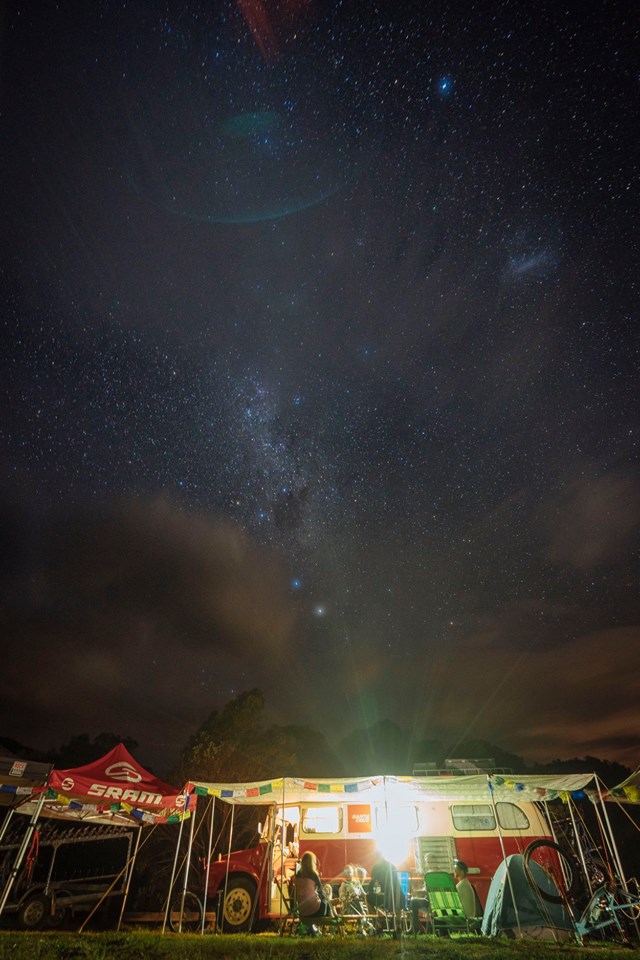 We started our adventure on Thursday, taking the camper out to Whites Bay, about 10 minutes north of Blenheim. The event village was already buzzing; lots of flags, rugs, music and loungers giving the place a real chilled out vibe. There were 140 riders getting registered to race, and each one of us got an impressive goodie bag, full of useful bike stuff. At this point however the weather decided to show us what it had in store for the weekend. Despite not raining since Christmas, and fires plaguing the area, we experienced monsoon downpour; Loud enough to wake us up in the middle of the night, and persisting to rain for the following two days. Regardless of learning almost all my riding skill in Scotland, where you think I would be used to the rain, I’m actually a pretty poor wet weather rider, combine this with the knowledge that all the trails in this area are built on clay (which might as well be ice when it’s wet), and the fact that I had never ridden anything in this area, had me feeling extremely nervous.

The rider briefing on day one saw a lot of eager racers, ready to ride, despite the conditions. The heavy rain did mean that the first stage, Double Eagle, was removed from the race due to its smooth man made design it would have been a slippery disaster zone. Not that anyone missed it, the weather made the transition and the remaining two stages treacherous enough. A 600m climb along the whites bay loop, with some hike-a-bike required, was tough start for the first day. However, at the top of the hill we were met by sombreros, poncho, and a piñata full of candy, so it wasn’t all bad. Stage one was quite a comfortable warm up, not too steep, or slippery, but technical enough, with plenty of rock gardens to keep you on your toes, and a couple of punchy climbs towards the end. Stage two on the other hand was an entirely different ball game. This stage made use of a walkers path, with lots of steep rooty chutes. I came in to this stage pretty confident, nailing the first few sections, but the combination of clay that moved like oil, tree roots which were strangely grippy, and lots of jaggy rocks had a lot of riders seriously questioning their line choices. It was about half way down this stage, whilst I was trying to carry my bike down a mangled mess of tree roots, and as I was telling a photographer on my way past “screw this, I’m just trying to survive!”, where I knew that any hope of actually racing this weekend had gone out the window.  At the bottom of this stage there was a short transfer, which included a couple of river crossings (convenient for washing off the large amount of mud that was stuck to the bike), and a shuttle waiting to take us back to camp for some burgers and beers.

Everyone was hoping the weather would improve for the second and longest day on the bike, and although it wasn’t falling from the sky with such force, it was still a very wet and humid day. A shuttle bus took all the riders to the start of stage one at Nydia Bay, where we were met by a couple of marshals dressed as rabbits, on a red carpet and lots of bubbles (don’t ask why, but it did make me smile). I came in to the first stage pretty chilled out; after yesterday I didn’t know what to expect on this track. Turns out it was a really fun stage, a few rough and natural rock gardens which required a bit of tripod scooting to get over at the top, but with plenty of straight sections where you could get a bit of speed up on too. I hadn’t quite gotten over my nerves from yesterday, which resulted in me taking every flat, blind, corner pretty slowly, worried that there could be a sheer drop behind each one: there wasn’t. By the end of the stage I was sticking my feet out and sliding the back wheel around moto-style and really starting to enjoy myself. Nerves restored we tackled the next climb. This one seemed to go on forever, although the 8km and 400m elevation would never normally phase me, the amount the track undulated, added a lot more climbing, and the trail was all narrow single track, littered with unscalable tree roots, even feeling keen and conquering the first few wasn’t enough to get you even close to the top (all this was probably made worse by the fact it was still raining – I didn’t even know it was possible for the sky to hold so much water). When we finally reached the top we were all wet and a bit cold, and it turns out stage two today, was just as tough as stage two the first day. Although I came in to this stage optimistically, I was quickly knocked down a peg or two, when what I thought were rollable rock slabs, turned out to be walls of clay, hitting them at speed resulted in me sliding down them on my side, twisting my bars and break leavers in the process. After that I struggled to figure out what lines to take and how to manage my speed, which resulted in a lot of jumping off and walking sections. By the bottom of this stage I was seriously questioning whether I should even continue, and I have never dropped out of a race yet. Fortunately some very tasty veggie chilli and chocolate brownies waiting for us at the half way point was enough to cheer me up again – I am very easy to keep happy.

I am very glad that I decided to continue racing, even after another long slog to the top of the hill, stage three was enough to have me grinning again. It started similar to the other stages, beech forest on clay soil, with plenty of awkward rocks, but it then descended in to pine forest, which is something I am a bit more used to. Sliding around in the pine needles felt a bit more like home, and although it might have just been a psychological effect, it worked, and I started to feel like myself on the bike again. It was only a short climb to stage four, for the fasted track so far. Pretty much just a straight line down a walkers track, meant getting fast, and trusting your tires in the flat corners, and resulted in my best stage time of the whole weekend, coming 7th. After such a long gruelling day we were grateful of the crisps and beer at the end of the stage, whilst we waiting for the shuttle to take us back to our van. 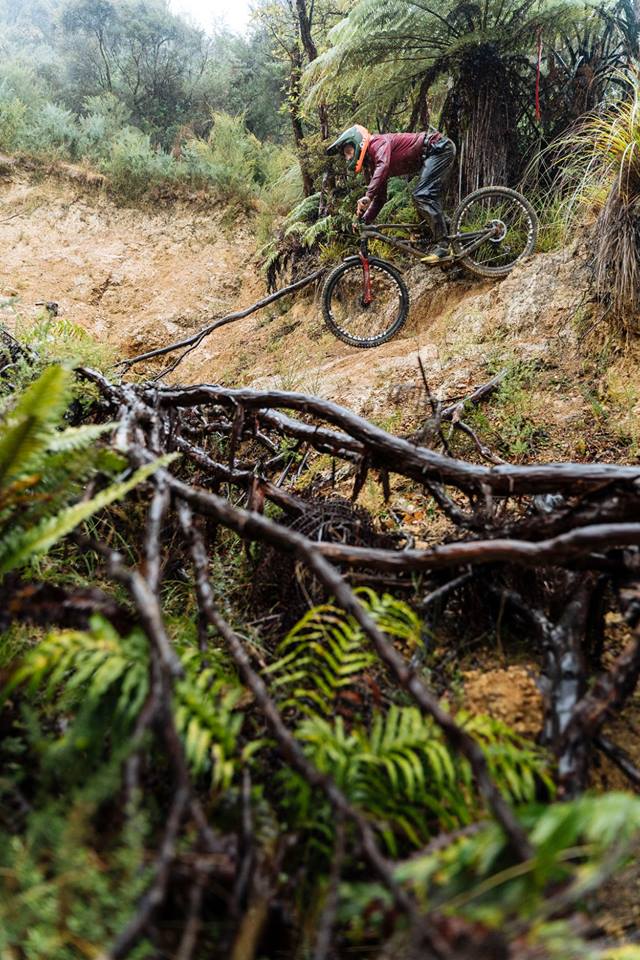 All weekend we had been watching the weather forecast closely to see if it would clear up long enough for us to get the helicopter running to shuttle everyone to the top of Wakamarina, and although the weather had improved, the air pressures weren’t stable enough to guarantee getting everyone up. So the back up plan was used. World Cup rider Justin Leov and his partner run a trail center at Jentree, and opened it up for us to use. In stark contrast to the previous few days this were purpose built trails on open grassy hillside, and I was feeling a lot more confident about the day. A relatively short 30min push to the top of the hill took us to stage one. Despite falling off in the first corner, I held it together for a pretty decent run. Being able to see further along the trail, and have some faith that there wasn’t going to be anything I would have to run, made the racing a lot more comfortable. Stage two was pretty similar, pushing further up the hill this time for a longer trail was worth it. Stage two was more of a flow trail, and my months in the bike park paid off, being able to read the corners and hold my speed.

The final stage of the whole event was a spectacle. The whole track could be viewed by those waiting to race at the top and those who had already finished at the bottom, resulting in big cheers and support at all points on the track. The top section was a bit awkward and off camber, but this eventually opened up in to some more flowy trail, and finished with a mad sprint across the grass, and a river crossing. Every technique was tried, slow and steady, as fast as possible, manualing across it, and even trying to jump the whole thing, it didn’t matter everyone ended up soaked one way or the other. But standing on the finish line watching everyone’s final run was certainly a fantastic way to finish up the weekend. Well that and more tortillas and beer. 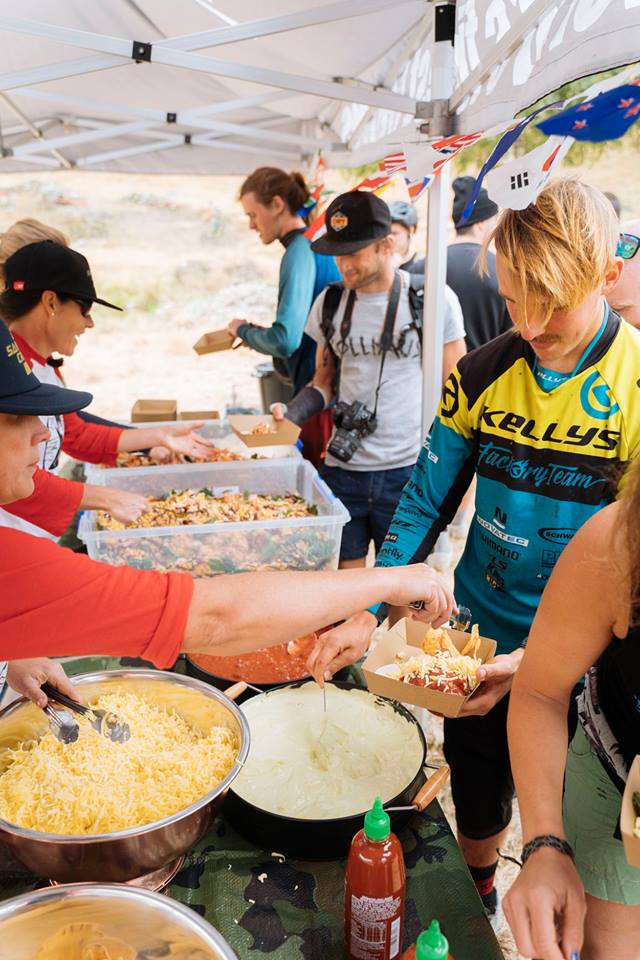 I said at the beginning I wasn’t sure what to think about the NZ Enduro, and to be honest I’m still not sure. There have been a lot of highs and lows. The weather was definitely a downer on the event, but that can’t be controlled and I think that most of us were able to keep the spirit going regardless, however some very tough hike-a-bike climbs, and a lot of stages where even the riders who knew where they were going, struggled with and had to walk, makes me think that actually this event would be a lot more enjoyable if I knew even a little bit about the terrain beforehand. But when the trails were good, they were very good, and the atmosphere was always buzzing with people enjoying themselves. Given that I had totally written of treating this as a race by the end of the first day I was amazed to find I had come 11th out of 22 in my category. Although I think everyone was questioning their ability to ride a bike at some point throughout the weekend, I think we all came out of it stronger as a result of just surviving it.